Theft and No Choices

This is a picture of Sarah, whose family has recently discovered that a big area of their land has been taken by Israeli settlers – trees have been cut down and the settlers are preparing to build it. The family have been told that there was a notice put some years ago in Hebrew in an Israeli newspaper asking for the landowners to claim the land, and that as they didn’t answer (they wouldn’t see it of course!), it was being taken over. 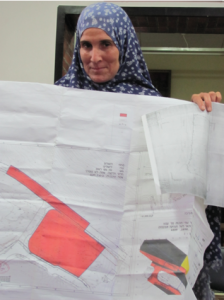 Forced to hire an expensive Israeli lawyer, the family have been told that the best they can hope for is compensation – but they want their land back! They were not trying to sell it!

The picture shows Sarah with the land maps – and below is a story she wrote some time ago about another forced land expropriation in her family.

An incident that affected me and changed my life.

“Once upon a time I was living in a peaceful village in the north. I was the owner of a big piece of land that has a great location.  I grew up there and I spent most of my life working on it and planting trees and vegetables on it.

“ One day after all those years I saw the Israeli soldiers coming to  my house and trying to force me to sign some papers. They wanted me to sign to say that I sold them my land.  Can you imagine me selling my  old days, selling my life? They wanted to take my land.

“The problem is not that I refused and I was humiliated because of that. The issue was greater than that. I could not leave my whole life behind just because the Israeli army wanted my land, my life, my great days, my memories. If I was to sign this document I would be giving my life to the stranger – that was killing me deep inside.”

That was a story I heard from my father-in-law.

Honestly while listening to the story I felt so bad – the mixture of empathy and sympathy that was fighting inside was unbelievable. Is it that easy to sell your life because of a desire of a stranger? Will my life be the same? And the outcome would be the same in both cases, if I signed and gave them my life, and if I refused to sign. How hard life is when someone has a choice but his choice is not a real choice, because in both cases he will be the loser.

How can you be optimistic in such a situation? How can you raise your children: what are the values that you will be teaching them, when all values are being destroyed in front of them daily?

That story was not only a story it was the reflection of the reality of our lives. We face reality and have to choose things in a situation with no choice – is there anything harder than that?