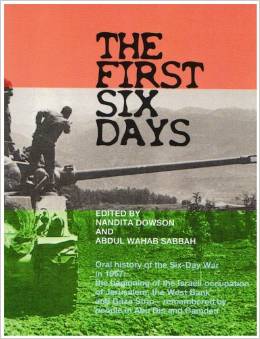 Abu Dis Memories of the Six-day War in 1967 – the Beginning of the Israeli Occupation of the West Bank and Gaza Strip.

In June 1967, the people of Abu Dis found themselves in the front line of the 1967 war, and this book of oral history contains people’s memories of their responses as the war started and of their families’ movements in its immediate aftermath. These memories are contrasted with memories of the same period by people from Camden, including an Israeli woman, now living in Camden, who in 1967 was called into the Israeli Reserve Army. There are also explanations from Abu Dis of the context of 1967 and the effects of the war on the lives of ordinary people in Abu Dis. Click here for book review and here for flyer

There are no reviews yet.

Be the first to review “The first six days” Cancel reply